Posted on April 26, 2014 by Thestrugglershandbook

Recently I answered the call, as a good and patriotic American, to serve my country and its 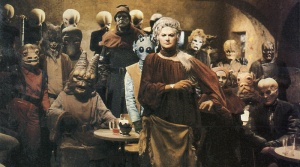 legal system as a prospective juror.  I have served in this capacity a number of times – seemingly every year (honestly, by what criteria do they select the jury pool? I am convinced it is by ugly license photo, which explains why I am always there and why the room where all jurors sit and wait reminds me of the bar scene from Star Wars) – and yet had never before been picked to actually sit and hear a case. In the past, whenever chosen as a potential juror for a particular trial, I have managed to conjure up some shocking bias during jury selection that offends either the prosecution or defense and predisposes me to be cast unceremoniously back into the general pool.

Judge: “Is there anything about this trial, wherein a man stands accused of possession of heroin with intent to sell, that should preclude you from being able to weigh in on his guilt or innocence in a fair and impartial manner?”

Judge: “Number fourteen…Mr. Peddy, is it? What is the preclusion of which you speak?”

Me: “Your honor, I don’t trust white people who sell smack. I always buy from blacks or hispanics, but the one time I did score off a white dude I got a bad batch and almost died. He kinda looks like the guy, as a matter of fact.”

Judge: “Number fourteen, you are excused.”

This time, however, I was either off my game or the opposing attorneys were remarkably poor judges of character.  Nothing I threw out there seemed to offend anyone, and once I was told the trial would take a day and a half at most, I decided to allow fate to either choose or preclude me as a juror.

Naturally, I was chosen. The trial began soon after and moved along at a decent pace. I found myself more interested than I had expected to be. A woman stood accused of driving while under the influence of prescription drugs; she didn’t dispute that she had enough painkillers in her system to cause a male elephant to don women’s clothing and besmirch the family name.  She claimed that, through a life of tremendous physical misfortune, she had been popping Oxycontin for years and her resistance to its effects had steadily grown. No, she wasn’t impaired, but merely exhausted, from having had no sleep for two nights and driving four hundred miles from Texas. She and her lawyer maintained this was a far more plausible explanation for her having rear-ended another vehicle, then appearing incoherent and unable to maintain her balance when questioned and tested by responding police officers. I scanned the courtroom for the book that I and my fellow jurors would soon be throwing at her.

Before we could bounce said book off her inebriated noggin, however, it was decided that all in attendance were in need of a recess. (The judge, who was easily in his late sixties, needed a nap). I waddled off into Tucson’s downtown area in search of bad food, which I soon found at a local establishment called Herberto’s.

Herberto’s, as you might have guessed, is a Mexican restaurant. I scanned the menu for my favorite item: the Chorizo Burrito. Chorizo is a Mexican sausage, made from the remnants on the slaughterhouse floor, scooped up with a shovel and encased in beef or pig intestines. Chili powder and E-Coli are the primary spices, and oodles of grease make the medicine go down. Amazing.

Pig (parts) in a Blanket; the Chorizo Burrito – Image courtesy of Menuism.com

I went to the counter to place my order. Clearly, this was not Burger King; special orders do upset us. The man at the register’s face was riddled with all manner of graffiti, including tattoos of knives dripping blood and a tear coming from the corner of each eye. (The knives apparently revealed why he wasn’t working in the kitchen; the teardrops meant he had either committed murder, or was incapable of crying on his own). I gave him my order and handed over my wallet reflexively; he smirked as though to say that if I were still around when his shift was over, this was the very least I would have to give up.

Soon I had my food. I went to a nearby park where I felt less likely to be killed and dug in with all twelve teeth. It was amazing; the tiny bits of cartilage and sinew scattered here and there within were as inviting as chocolate chips in a bowl of vanilla ice cream, and soon the overstuffed burrito was but a pleasant memory. I lay down under a shady tree and, after collecting several unsolicited donations of dollar bills and assorted change in my open lunch bag from passers-by, resolved to dress better and shave next time I came downtown.

Once the trial began again, it moved along at a fairly brisk pace. It seemed we would finish in a couple of hours, and deliberations were to be a quick and foregone conclusion. I was to this point pleased with the whole experience and resolved to improve my attitude with respect to civic duty in the future.

When things start to go wrong in the digestive process, there is usually some warning, some sense that the order of things intestinally may be becoming slightly off-kilter. Well, the cable that held the elevator of my stomach’s contents snapped, and all went from fifth floor to basement in one alarming second. My gut began to gurgle like a water cooler being drained; before I could stop it, I let out a whimper that sounded as though it could have come from a caged puppy, and the juror to my left cleared his throat and shifted uncomfortably.

The situation had gone from serene to desperate in literally a matter of seconds. I considered raising my hand and asking to be excused for a few minutes, but honestly felt that if I stood I might spontaneously introduce my lower intestine into evidence in dramatic and explosive fashion. I resolved to fight to the bitter end and defend propriety from the charging Mongol horde in my lower colon. If I lost the battle, I decided I would yell “Mistrial! Mistrial!” and waddle out with both my trousers full and whatever shred of dignity (and chorizo) I still had left.

Almost as quickly as the situation had become dire, it began to improve. Though my sphincter remained closed tighter than a Tea Partier’s mind, disaster had been averted. The trial ended, the jury deliberated and Heidi Pillpopper was found guilty. I actually made it all the way home before finally succumbing to the interminable pressure of the Herberto Chorizo Burrito.

For those of you in need of a thorough “cleansing”, I heartily recommend a visit to downtown Tucson and Herberto’s Mexican Restaurant. So thorough was its effect that I finally dislodged and expelled all the gum I’d swallowed as a child and the plastic toothpick I’d lost some years back after passing out on the couch after a night on the town.

I'm a middle aged (if I live to be 100) guy, married, father of three, from Tucson, AZ. I'll write about almost anything. Though somewhat bent, what I write is always true(ish). It won't change your life, however. Unless that would preclude you from reading...
View all posts by Thestrugglershandbook →
This entry was posted in Arizona, Dining Out, Health, Humor, Life, Living, Tucson, Uncategorized and tagged Arizona, Food, Health, humor, Life, Living, Travel, Tucson. Bookmark the permalink.