I Don’t Think My Wife Loves Me

Posted on September 8, 2014 by Thestrugglershandbook

Recently I saw a show about parasites. In it a man and his wife, who were camping in Canada, had caught a number of rainbow trout from a lake. They began to cook their catch over an open flame, but as it was late and they were tired, removed the fish from the fire, ate and went to sleep. The next day, neither showed any symptoms of food poisoning and so went about the remainder of their trip without concern.

Some weeks later the man, newspaper tucked under arm, went to the bathroom to conduct some personal business. After a few minutes of reflection he realized, as he explained later, that “something didn’t feel quite right.” In effect, something was there “that wasn’t supposed to be.” Justifiably alarmed, he called out to his wife for assistance. 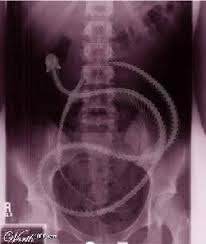 Sensing the panic in her husband’s voice, the wife came quickly; her husband stood and turned in order to afford her a better view. There was something, over two feet in length and clearly foreign to his body, descending vertically from his anus. She grabbed the alien protuberance and pulled, but it split in two, the upper portion ascending back into her husband’s body. The aforementioned under-cooked fish dinner had proved troublesome after all, in the form of a three-foot long tapeworm.

I relay this story not to enlighten you on the origins and tendencies of the tapeworm in the human body, though I did find it intriguing (and an appropriate punishment for the consumption of the foul and inedible); rather, this is a story of the enduring and uncompromising love of a wife for her husband. This woman, in response to a call of distress, came to her husband’s aid and responded without hesitation to a desperate situation, without regard to her own personal safety or sense of propriety. While perhaps not the most romantic example this, to me, is true love. Tapeworm notwithstanding, this man should thank the Lord for the blessings of life and of a good and devoted spouse.

I told this story to my wife and asked what she thought. She told me that if I were to scream for help from the bathroom, she would likely come in response; however, under no circumstance am I ever to afford her any enhanced views of my butt door, and if some alien being should descend wriggling from said opening, I am completely and unequivocally on my own.

Me and the Mrs. Courtesy Google Images

I find her recalcitrance with respect to matters concerning my anus most unsettling. We married for better or for worse, and while I admit that coming face-to-face and dealing with the nether regions of a large and hairy man falls decidedly into the latter category, I am, after all, her husband and presumably the apple of her eye. And does it end there? As I continue my inexorable and admittedly selfish march to physical despair, will she be goose-stepping by my side the whole way? In ten or twenty years and from years of poor choices and easy outs, when I am a bed-ridden, geriatric Jabba the Hutt, will she be there to roll and wipe me, to remove the peanut M & Ms and bread crusts that fall from my mouth and lodge in my fat folds? Frankly, I’m afraid to ask.

I don’t think my wife loves me.

I'm a middle aged (if I live to be 100) guy, married, father of three, from Tucson, AZ. I'll write about almost anything. Though somewhat bent, what I write is always true(ish). It won't change your life, however. Unless that would preclude you from reading...
View all posts by Thestrugglershandbook →
This entry was posted in Aging, Diet, Fishing, Health, Humor, Life, Marriage, Uncategorized and tagged Fishing, Food, Health, humor, Life, Living, Love, Marriage. Bookmark the permalink.

6 Responses to I Don’t Think My Wife Loves Me