Posted on November 13, 2011 by Thestrugglershandbook

I promised in Scary Arizona – Don’t Come Here!, Part II to tell of my harrowing personal encounters with some of the most tenacious, vicious wildlife in Arizona. Though I haven’t had a terrifying personal experience with either, I would be remiss not to first mention the two perhaps most formidable creatures roaming our desert: The Mountain Lion (Puma) and the Bobcat. I have seen both in the wild, and from what I consider a safe distance (inside my truck, on a customer’s porch and the railing at the Arizona Sonoran Desert Museum). Both are terrifying in their ability to ravage someone with claws and fangs, and in the case of the Puma, to partially consume them. They are, after all, cats; anyone who has owned a cat and teased it (I submit the following logical equation: if A, then B) knows how much pain Whiskers can inflict once she gets going. And these are steroidal cats: a male Bobcat can weigh over 40 pounds, the male Puma over 200. Clearly, anyone roaming the desert with shoestrings untied or pulling a ball of yarn is asking for trouble.

Two or three years ago several Mountain Lions were spotted, over the course of a couple of weeks, hanging in and around Sabino Canyon, a popular hiking spot north of Tucson. Apparently, those in charge surmised that lions allowing themselves to be seen by more than one clumsy, dim-witted human (in nature, this describes nearly all of us) was a sign that the cats had lost their natural fear of man. They decided that the lions had to be removed, lest humanity lose another dummy.  Furthermore, they decided that tranquilizing and relocating these animals was an awful lot of work and, in any event, shooting to kill was way more fun (there are a lot of hunters in wildlife management. Hmm…). Whatever the reason, the canyon was closed and in they went, guns blazing, and came to our collective “rescue” before a single threatening hiss was heard. By now I suspect a much more stealthy and therefore dangerous group of cougars has replaced their predecessors in the canyon, having heard from survivors how mean those clumsy, dim-witted hairless canyon apes can be.

Not very long ago, two old men (let’s call them Earl and Vern)  were playing golf at a private club in the northern foothills of Tucson. As they walked onto the tee box of the seventh hole, a rabid Bobcat broke from the underbrush, jumped onto Vern and began to ravage him mercilessly.

“Well, Vern, you had a ten on that last hole, so the tee is yours.” Said Earl, his voice shaky with age and the exertion of having shuffled from cart to tee.

“Oh, ready golf? Okay then, I’ll hit.” And with that, Earl duck-hooked his drive into the patio set of a home that, along with several others, lined the left fairway.

“Aaaaaaah! Help! Somebody Help!” Apparently, Vern was in some distress.

“Relax, Vern. I got lots of balls.” After circling unsteadily three or four times in search of his tee, Earl looked up and saw the terrible event unfolding, and quickly teetered to action. He took a couple of swings at the offending beast in Vern’s defense. The effect was not what he had hoped, however, and so he waddled off to the cart for a different club (he had grabbed his 3-iron by mistake, which he had never swung particularly well; in his mind, this explained the duck-hook).

Driver in hand (it had a much bigger sweet spot, and being the longest club, allowed him to engage the beast from a safer distance), Earl reentered the fray, and after a few dozen hearty swings (and a few mulligans), the bobcat lay dead on the ground. Earl helped Vern to the cart, then circled around to the driver’s side.

“Holy cow, Vern. That was something else. We gotta get you to a hospital. Sorry I hit you all those times – that booger was fast. Just hold tight. Thank God we only have two holes left.”

The attack did happen, and the bobcat was rabid. Can you imagine the abject terror Vern experienced, at the mercy of both  brain-sizzled supercat bent on destruction and Earl, who is clearly not a good golfer? Admittedly, these are likely two of the foulest beasts native to Arizona (the cats, not Vern and Earl), and I’ve had issue with neither. But I could, which explains the adrenaline-inspired goosebumps that initialize scrotally and my sphincter bleating a spontaneous alarm whenever there’s a rustling in the bushes behind me (it’s almost always a bunny. Though they’ve scared me more often than any other creature, and after much consideration, they did not make my list). I’m Lame, you say; but wait until you hear of my close encounters, which I cross my heart and hope to die promise (the highest level of promise) to tell you about in Scary Arizona – Don’t Come Here, Part IV. 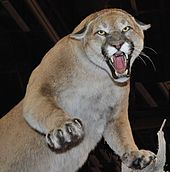 All stuffed predators are posed this way

I'm a middle aged (if I live to be 100) guy, married, father of three, from Tucson, AZ. I'll write about almost anything. Though somewhat bent, what I write is always true(ish). It won't change your life, however. Unless that would preclude you from reading...
View all posts by Thestrugglershandbook →
This entry was posted in Humor and tagged Arizona. Bookmark the permalink.