Posted on December 15, 2011 by Thestrugglershandbook

As I mentioned before (part I), whenever we visited my father’s family in Deridder, Louisiana, we stayed at my grandfather’s house. It was a small, white, two bedroom, wooden home located just outside of town. Papa was a simple man, with simple tastes: he loved fried catfish (breakfast, lunch and dinner), chewing tobacco (as evidenced by the spit cups scattered throughout the house), and watching pro wrestling on his black and white television (“That…Mad…Dog…is…a…mean…mother!). His daughters bought him a color set, but he didn’t like it (“Don’t…look…natural.). It only made sense that his house was simple too; one probably wouldn’t look at it twice, but it served its purpose. 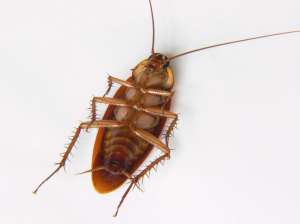 Because there were only two bedrooms, I was always relegated to the couch, which was okay were it not for a slight issue: there seemed to be a bit of a cockroach problem. By a bit I mean to say that they were everywhere. Papa’s house wasn’t ill-kept (save for the aforementioned spit cups); food was stored properly. It was more a function, I believe, of a perfect storm of factors that individually might cause a slight, yet conquerable infestation, but when combined resulted in a full-blown takeover. First, it was a wet, humid climate that roaches seem to favor; add to this the age of the house, and then, for the cherry on top, the fact that my grandfather didn’t seem to mind them and therefore did nothing to get rid of them.  He seemed to regard them as part of Louisiana living; compared to some of the nasty creatures he had dealt with while tromping through the woods and swamps, these were timid, harmless and adeptly low profile(they generally came out, in profusion, at night after he went to bed).

Those of you who read my stuff are probably convinced by now that I am afraid of my own shadow (well, it is really big). Respectfully, I submit to you that I am not; I am merely more cognizant than most of the perils inherent in contact with certain species. I am most definitely not afraid of bugs; they live in abundant variety in Arizona, I run into them often and there are some very nasty ones here. The cockroach, however, is another matter. I have been accused of being somewhat germophobic; I acknowledge only a certain heightened awareness of germs, their existence virtually everywhere around me and their predilection to sicken and/or kill me. For this reason, a bug that frolics along the shore of every conveyance of human waste, then comes into your home and does the Macarena on your dishes is one that I simply cannot tolerate.
It didn’t help that the roaches in this home seemed to be steroidal; they were the Mandingo of cockroaches. If they had a football team, they would be Louisiana state champions for ten years running. If you tried to step on one, it might grab you by the shoe and twist your foot until you lost your balance and fell. As a result, I carried an aerosol can of roach killer everywhere I went in that house. I waged my own personal war with them in my grandfather’s home. I imagined they had a poster of me hanging somewhere (probably in their post office); I was public enemy number one.
One evening I woke up in the middle of the night and went to the bathroom; I brought along my trusted spray for protection. When I turned on the light, I saw him immediately. It was the biggest roach I had ever seen, fully four inches in length, on the bathroom mirror. Strangely, where most cockroaches would have run for cover when the lights came on, this one turned around on the mirror, as if to face me. Clearly a higher link in the food chain, I was both angered and offended by his arrogance and so raised my can to fire. When I did, the megaroach did the most remarkable and horrible thing: he launched himself from the mirror and flew directly at me. Are you freaking kidding me? Roaches can fly? I thought as I stumbled back and sprayed a cloud of retreating fire. He veered to the left through the kitchen doorway and landed with a loud skidding sound. Now you’re mine.
I  turned on the light and stopped dead in my tracks. There he lay, on the linoleum floor, surrounded by at least three other roaches that encircled him.  It was apparent to me that they were showing concern for him; I imagined one of them asking “Who did this to you, Jim?” While another shouted “Legions, unite! Prepare for battle!” I was certain it said this, because right away several more came in from under the opposite kitchen door that led outside.
It was more than I could bear. I sprayed a line of repellent across the threshhold of the kitchen doorway, another on the floor around the entire front of the couch and still another across the wall behind it. I sat there the rest of the night, sleepless, knees up, nearly overwhelmed by the fumes, yet unwilling to move.
The next morning, there was no evidence to suggest anything had happened: the giant roach was gone. Either he had survived, or they’d taken him back to perform a ceremony befitting a fallen leader of state. Soon everyone was up for breakfast and I forgot about the whole sordid affair in short order.
During breakfast, my father asked me to help him clean the storeroom outside the kitchen and we began the chore immediately after. Not long into the job I lifted a steel washtub that sat upside down on the storeroom floor and nearly soiled myself when I saw what was underneath: a two foot wide, eighteen inch high, teeming mass of cockroaches. I was like Sigourney Weaver in Aliens; I had found the nest, but instead of a flame thrower, I was armed only with my trusted can of bug killer. In retrospect, I should have seen the sheer stupidity of what I did next, but I was weary of battle and saw only an end to war.  I sprayed the pulsating pile, and it immediately exploded in every direction. Throngs of giant roaches ran up my legs, into my shorts, under my shirt. I bolted from the storeroom outside, pulling off clothing as I ran. People across Beauregard Parish ran outside from their homes to see why Sigourney Weaver was screaming at the top of her lungs.
When I look back on that day, I can say now that some good came of it. I had never seen my old man cry before then; no matter that it was from laughing. I can still see my grandfather, eyes squinting, toothless grin from ear to ear, shoulders bouncing. As I stood naked in his back yard, lifting and separating in search of any remaining invaders, I found instead that there is often much joy to be had in the misery and misfortune of others (as long as no one gets hurt – permanently). Other than my keen hyperawareness of germs and perhaps as yet undiscovered cockroach remains in my upper colon, I emerged unharmed. I am ever on the lookout for the humor in the folly of others but, sadly, seem always to remember best the joy others found in mine.

I'm a middle aged (if I live to be 100) guy, married, father of three, from Tucson, AZ. I'll write about almost anything. Though somewhat bent, what I write is always true(ish). It won't change your life, however. Unless that would preclude you from reading...
View all posts by Thestrugglershandbook →
This entry was posted in Arizona, Christianity, Family, Humor, Louisiana, Religion, Travel, Uncategorized and tagged Animals, Cockroaches, Insects, Louisiana, Travel. Bookmark the permalink.