Posted on October 3, 2012 by Thestrugglershandbook

I suppose it’s not unusual for people to be proud of where they’re from. I’m sure there’s a few people from Grand Forks, North Dakota who think they live in earth’s Eden. I lived there for a year as a child, and I thought it was absolute hell. (By default, the old saying “When hell freezes over” therefore means annually, from late September until early April). Still, there were positives: I remember some good fishing, and about two weeks in early September that were pleasant weather-wise. I also remember swimming in a lake with my brother and, upon returning home, finding I’d inadvertently removed dozens of ticks and several leeches from their natural habitat; more than a few of both had affixed themselves to a most personal appendage and its accoutrements. While traumatic at any age, it was, as you might imagine, particularly so for a nine-year-old boy. But I digress; the point I’m failing to make is that there’s good and bad to be found anywhere you live, and the place I’ve called home the last forty-two years (good Lord) is no different.

Looking Down on Tucson from the North

I’m from Tucson, Arizona, and my town rocks. And my town sucks. There’s some really nice features about Tucson that make it a desirable place to live, and some characteristics that make it less so. Ultimately, there’s been enough to have kept me here for this long: there’s the climate, the people, the natural beauty around Tucson, my laziness and maddening (to others – I’m cool with it) resistance to change, and the lack of sufficient funding and opportunity elsewhere should I somehow be compelled, either by threat of divorce or imminent arrest, to leave.

Perhaps you’re considering a move yourself. I feel it’s my duty, as an ambassador for my hometown, to show you why Tucson could be an attractive choice for relocation. I also feel compelled, for reasons of morality (and to take up more space in this post), to tell you why you should look somewhere else. Like everywhere else, Tucson has its pros and cons. Consider:

PRO: Though the Tucson metro area is home to almost one million people, it retains a distinctly small town feel. I am constantly running into people from my past: those I knew from primary, middle and high schools, while in college and during my party days.

CON: I am constantly running into people from my past: those I knew from primary, middle and high schools, while in college and during my party days. I didn’t like most of you thirty and forty years ago; why would I now? And why are you still here? This is my town; find somewhere else to live.

PRO: Tucson has only one freeway, and it skirts around most of the city, so most of us don’t have to live in the shadow of a raised thoroughfare slicing across our yards. Conversely, our bigger, uglier sister to the north – Phoenix – is crisscrossed with an elaborate freeway system that visually mars every section of town. Phoenix wears the face of a woman whose plastic surgeon works from a small bedroom with an alley entrance. Tucson is set up in a fairly comprehensible grid system; major streets going in the same direction run generally parallel, and street numbers coordinate well.

CON: Tucson has only one freeway. The city and its satellites encompass an area greater than that of San Francisco, a city with four times the population; it takes forever to get across town. There are stop lights everywhere, each preset to change to red whenever I approach. Furthermore, many of the intersections have cameras which take your picture if you commit an “infraction.” Because I drive so much for work, I’ve taken to driving with a ski mask on, which can be very uncomfortable during the summer. Often by day’s end my features have been reduced to tribal shrunken head proportions, while still perched upon my ample (though still fetching) body. Like most cities, Tucson has no money and the roads are in disrepair. Potholes are so large and numerous that the city has suggested its drivers start wearing Depends, lest they hit one with enough force to spontaneously evacuate and then swerve violently from the resultant shock and embarrassment.

PRO: Tucson is a pretty safe place to live; I’m fairly comfortable in my surroundings, even at night, and have never witnessed a murder, though admittedly I’ve considered committing a few myself.

CON: I’m fairly comfortable in my surroundings because I live on the east side of town; on the south, southwest and central parts of town, people rob, rape, shoot and stab each other with regularity. I once had a gun pushed to my nose – see the Ten Times I Nearly Died – and my wife was once struck in the face by another motorist. (Yes, she’s an awful driver and he didn’t want to ride on the hood of her car, but still).

PRO: Tucson has mild winters and, as a result, many snowbirds flock here during the winter. I often walk around in the winter wearing t-shirt and shorts; though the coldest mornings might begin with sweater and heavy jacket, by afternoon they sit in a rumpled pile on the passenger seat of my work truck. It almost never snows and when it does it doesn’t stick. If you miss the snow or just want to play in it, you can usually find some after a forty-five minute drive up the mountain to the north of town.

Here’s One of the Old Birds Now

CON: Tucson has mild winters and, as a result, many snowbirds flock here during the winter. Driving across town can be maddening enough; it is particularly so during the winter months. Invariably I’ll come upon a newer-model car, puttering along at ten miles an hour below the speed limit, in the fast lane, weaving back and forth and without an apparent driver. Upon closer inspection, one can see a schlock of wispy, snow-white hair peeking barely above the headrest and a pair of white-gloved hands locked on the steering wheel at ten and two. Even more maddening is the obliviousness to the honking, screaming and rabid shaking of fists as I roar past them on the right after every other car on the road has passed and left us both in the dust.

In the summer, it’s hotter than hot. Nowhere on my body is the skin more taught and youthful in appearance than that on the backs of my thighs, because every time I leave my car the previous layer of skin remains with the seat.

PRO: Tucson is surrounded by mountain ranges in all four directions and some amazing desert scenery in between. It is an interactive delight, with several state parks, a national forest and hundreds of miles of hiking trails at various elevations and degrees of difficulty. Tucson is a “bike friendly” town; thousands of riders use the streets in and around town daily. 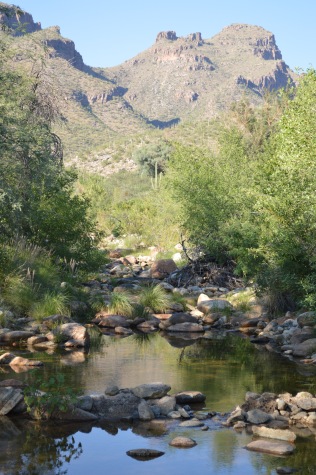 CON: While there is ample natural beauty in the area, many who visit show it no respect, and leave trash and recyclables strewn about in their wake. My wife, the envirohippie, picks up beer bottles and cans and stores them in our car. In addition to transporting the DNA of some of the more despicable elements of society in my auto, I also resent the false evidence available to the authorities should I be pulled over for drunk driving. The bike riders are, in most cases, an acceptable nuisance, but occasionally one oversteps their bounds and presents an intrusive, yet somehow enticing obstruction to my driving experience. There is a solid white line painted on the right side of the road; bikers are supposed to ride to the right of it. Often, though, the bike rider pedals slowly along to the left of the line; I can only assume they’re British. I briefly consider how their neon green gayshirt with corresponding black buttpad shorts splayed across my front grill might liven up the overwhelmingly dull white look of my truck, but invariably reason (I might get caught) takes over and I’m reduced to an exaggerated toot of the horn and one finger salute as I pass.

I could go on and on, but you get the point. Tucson, like every other city in America, has it’s good and bad sides. Hopefully, if you’ve considered a move here in the near future, I’ve provided some solid information to help you make a decision. I’ll be sure to peruse the chamber of commerce statistics for the next couple of months to see if I’ve made an impact.

14 Responses to Tucson, You’re My Town