Posted on May 11, 2012 by Thestrugglershandbook

She was born on May 11, 1994. Honestly, the only real trouble she’s ever given my wife and I was while she was still in the womb. My wife suffered from pre-eclampsia during each of her three pregnancies; with this last one she stayed in a hospital bed for almost three months. During this time I would shuttle the other two children to Grandma’s in the morning, go to work, pick them up afterwards, take them to see mom in the hospital and then home to get ready for bed. It was hard for me; hospitals are gross, full of sick, vomiting, pooping people, and germs are everywhere. (Those of you who follow know how disturbing that can be for me). It  was also a lot of work, and the experience truly gave me insight into just how adept my wife was at raising our children and maintaining our household. As tough as it was for me, imagine, then, how hard it was for my wife: pre-eclamptic, bedridden, hopelessly bored, missing her family and completely at the mercy of others to see her family. It was a hard time, deeply stressful for the burdens placed on us both and for the concern over the safety of my wife and for the baby we had yet to meet.

It was so worth it. Admittedly, it’s so much easier for me to say; I merely had to hold her hand and offer meager support while my wife endured another caesarean section and a liberal anaesthesiologist. (I want this guy should I ever have need; he gave her virtually every drug combination known to man. He made her sick, but spewing is a small price to pay for comfort and pleasure. Later, she nearly rubbed off her own nose in reaction to the ridiculous amounts of morphine he prescribed. I have a big nose…). The baby was unique and instantly loved. She was our first and only baby with hair and the only one you could claim was chubby (It didn’t last long); as an infant, she looked like a miniature version of the Michelin Man.

She grew quickly, and became a source of entertainment in short order. As a toddler, she would point at the cupboard where the snacks were kept and say “dis.” Offer the wrong one, however, and she would respond with a shake of her head and a more intense “diiiiiiiis!” Her intonation and decibel level would increase with each offering until the desired snack was selected. She would often walk around the living room, clad only in diaper (I will do the same for her at an appropriate time, though hopefully much later) and engage in a rolling dialogue that covered a variety of topics; offer some laughter in response, and even at that age she would take it and run with it. She was a show person, a stand-up comedian in front of those whom she felt comfortable with. Later, she was a natural in front of any audience, doing Kramer impressions (from Seinfeld) at a talent show and displaying an amazing gift for piano at public recitals. 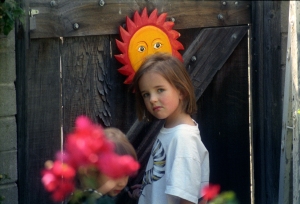 She started playing basketball at a young age, following the lead of her siblings, and played mostly with boys until sixth grade. Over the years, she developed a very nice jump shot, receiving the ultimate praise from the boys who played at her high school: “She shoots like a dude.” I got into coaching because of her, beginning as an assistant to the head coach of her sixth grade middle school team. My wife and I were blessed to watch her play for thirteen years on various teams; she calmly and respectfully absorbed our praises (my wife is unfailingly supportive) and admonishment (I am less so) with respect to her play, though her innate understanding of the game precluded me having to say a word.

Today is her eighteenth birthday. She graduates in two weeks and will soon begin the next stage of her life. She calls me “Papa Bear.” Mess with her and you’ll find out why. She has grown into a beautiful young lady; when I look at her, my heart hops a bit (it’s an old and infirmed heart – it scoffs at leap and settles for hop). I see both her mother and sister, but she’s added her own special spice to the mix, and the final recipe, to me, is flawless. I want so badly to show her off to all of you (actually, she’s the one on the left in the seagull picture), but she is precious to me; you’ll have to take my word for it. She is smart, self-assured, always kind, a friend to all who know her, and I could not be more proud of her. I can’t wait to see what God has in store for her; hopefully a guy won’t be involved for another ten to fifty years. If there is a guy, though, I know he’ll be special, because he will have run a long and terrible gauntlet.

I'm a middle aged (if I live to be 100) guy, married, father of three, from Tucson, AZ. I'll write about almost anything. Though somewhat bent, what I write is always true(ish). It won't change your life, however. Unless that would preclude you from reading...
View all posts by Thestrugglershandbook →
This entry was posted in Children, Christianity, Family, Humor, Living, Marriage, Parenting, Religion and tagged Children, Christianity, family, humor, Life, Living, Marriage, Parenting, Religion. Bookmark the permalink.