Posted on September 15, 2012 by Thestrugglershandbook

In a prior post in this series (see Part II), I mentioned the uninvited dogs who have invaded my once peaceful abode and since rendered it and my existence only marginally livable. As much as these loud, obnoxious, ever-ravenous and flatulent beasts have set my life off-kilter, however, they are nothing compared to the horde of felines that have meowed, purred, howled and hissed their way into my home and violated my olfactories in most brutal fashion. My wife is Noah and my house her ark; but instead of two of every kind, all that enter in droves seem to be cats, and when the flood waters recede none of them will leave.

At present, there are nine cats, lying resplendently in various poses of leisure around my house. There is no escaping them in any room. As social animals, they prefer an audience and/or victim should they desire to knock over or otherwise destroy something expensive;  jump up from a dead sleep and schizophrenically skitter across one’s sensitive regions with claws extended; or expel an offending turd that would quickly clear even the most frenzied, riotous crowd from the gates of an American embassy. (Note: my wife does an exceptionally good job of cleaning up after them and rendering their emissions undetectable, but sometimes she’s not home, and then what?…).

Without further ado, then, the nine cats that (ACK!…BLURP!…sorry, hairball) for now, at least, let me live with them in my house, and in the order in which they invaded:

1) TOMMY. Thomas and the next two cats are brothers, orphaned at only one week after their mother was hit by a car. My wife was asked to “foster” them, which included bottle feeding throughout the day; I knew I was done for the first time she did it. Tommy is gray, long-haired and slightly cross-eyed. Each stroke of his back sends a glob of hair floating into the air. (Kind of like me). He is one of my favorites, ranked one, two or three, depending on the week and who’s offended me most. 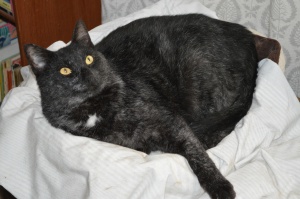 2) CALVIN. Tom’s brother. He often has tiny specks of poo stuck to his emitter, and if you pet him for any amount of time, he tries to suckle your arm. I think it’s because his mother didn’t teach him to wipe or get a chance to wean him before she died. He also almost never utters a sound, which I should find endearing, but instead it creeps me out a little. He’s solid at number seven in the favorites ranking. 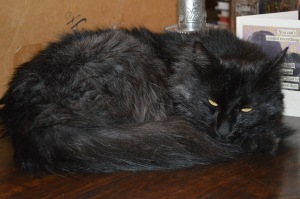 3) PETE. The third brother, Pete is a skinny sack of bones. He’s an amazing escape artist with an uncanny ability to sneak out a door as it’s being closed. Leaving him out is not an option; my wife gets frantic whenever a cat is missing, so I’m forced to chase him around the yard lest I be neutered in my sleep. He has a high-pitched, squeaky meow, and won’t hold still when he’s petted. I hate that. Number five, with little chance to improve. 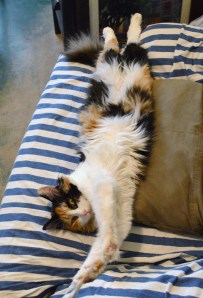 4) ROSIE. My wife decided to capture feral cats in our neighborhood in order to spay and neuter them. (Actually, the vet takes care of that part). Rosie and her brother Rufus were just kittens when they were caught, and my wife feigned concern over releasing them before they had sufficiently recovered. The recovery process is at two years and counting. Rosie is charming and precocious, though she has run across my face while I slept more than once, which would condemn most cats to a life as tennis racquet strings. She is pleasing to me; solid one or two.

5)RUFUS. Rosie’s brother, he may have been the most adorable kitten I’ve ever seen. He’s fairly shy, and apparently the lowest in the feline pecking order. Usually I find cowardice abhorrent in animals, but he meows in response whenever I say his name, which I regard as both respectful and necessary. Two or three. 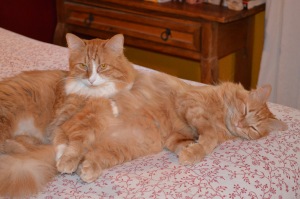 Roy at Right, with Rufus

6)  ROY. My wife caught him over a year ago and had him neutered; his recovery, strangely, is going very slowly as well. He is somehow related to Rosie and Rufus and both love him as much as cats are able to. He is exceedingly good-natured, adores my wife and tolerates me. Because he gives me no grief, he’s entrenched at number four.

7) MILO. We’ve only had him since the spring; some people we don’t know and had never met were moving away and couldn’t take him, so naturally it fell on us to give him a home. He is missing most of his tail; someone had tied him (by it) to a fence when he was a kitten. He immediately took over upon moving in; he torments all the others alternately and at his leisure. Though I resent his intrusion, I respect his ability to force his will upon the rest. Number six.

Numbers eight and nine I refuse to introduce;  Not This Time Man is standing strong on this one and has drawn the line in the sand (or cat litter, as it were). My wife took them in to help a military vet while he deals with an illness and living arrangements. He insists he will retrieve them when he’s settled. (Heck yes he will). 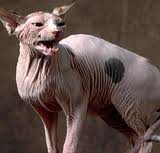 There you have it. Should a fire begin to consume my humble abode, I am resigned to tossing my wife, daughter, two dogs and nine cats out the window and into the waiting arms of firemen before I am allowed to try and save myself. By then, if still alive having cooked for several minutes, I will likely resemble (at best) an enormous, pink-skinned, hairless cat. In retrospect, that could be a blessing: in the future, I might have a chance to move up the list…

I'm a middle aged (if I live to be 100) guy, married, father of three, from Tucson, AZ. I'll write about almost anything. Though somewhat bent, what I write is always true(ish). It won't change your life, however. Unless that would preclude you from reading...
View all posts by Thestrugglershandbook →
This entry was posted in Cats, Christianity, Humor, Pets, Photography, Tucson, Uncategorized and tagged Animals, Cats, Christianity, humor, Life, Living, Pets, Photography. Bookmark the permalink.